In 2000 Martin Creed won the Turner prize with Work no 227: the lights going on and off’ It was exactly what it said it was and not surprisingly it polarised people. A fair few thought it was pretentious rubbish. But light and dark can be seen as evocative of a lot of different things – our moods, for example, or maybe life and death (a dichotomy which recurs).

All his early work dealt with the familiar, plain and simple, but at the same time treated in a way that was minimal and immaculate. A pile of ordinary but different chairs, perfectly stacked, a girl in a white dress squatting down to defecate, plainly and without false modesty, but with notable delicacy.

This new show though appears almost rambunctious: it is packed with paintings, animated sculptures, large scale video and live performance. It is exhilarating and you set out to enjoy it. But quite quickly you become aware of that sense of anguish, which was always there, but now has floated closer to the surface.

Work No 2965 Self Portrait in a hair net with mouth open sounds rather cosy: it’s not, it’s chilling.

And then there’s his chihuahua Jimmy trapped on a high ledge, lighted candles blocking his route down to safety. Poor dog, he looks like he’s been through the mill.

‘I’m not doing what I want to do, this just isn’t want I want to do’ repeats a tall woman with a lovely voice. She is dressed in ragbag clothes but the gorgeous striped slippers on her feet are an art work in their own right. 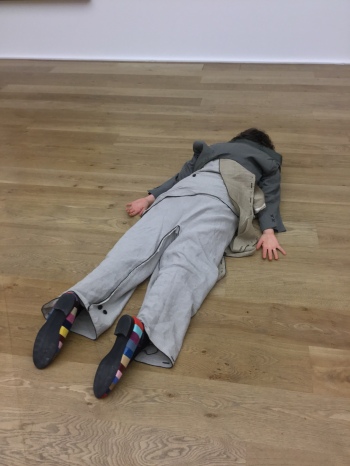 The events go on unfolding. Two assistants remove some works from the wall so that it becomes a screen. The camera homes in very slowly on a woman’s face until eventually she opens her mouth. A great gob of masticated gunk is pushed slowly forwards: it is quite hard to watch.

Better perhaps to concentrate on the paintings, which are beautiful. A pile of brightly coloured letters waft upwards spelling ‘dreams’, another shows the letters ‘PLEASE HELP ME’ rising precariously from a dark brown heap.  One of many charming drawings of Jimmy shows him silhouetted against the setting sun, with the word ‘gone’, nestling in the hummocks . Things are never quite as jaunty as they first appear.

A bronze sculpture of a slice of toast, which has been liberally smeared with a gilded  paste, revolves gently on a turntable. It is ludicrous but perfectly made. Like a lot of Creed’s work, it ends up getting to you.