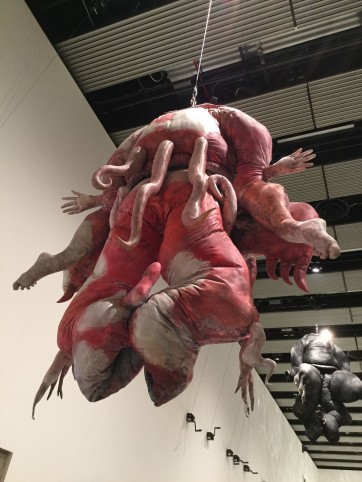 This show dazzles. The artist initially became known for her Cyborgs, the first one I saw was in Global Feminisms at the Brooklyn Museum in 2007. At that time they seemed to link to the current feminist theory, specifically Donna Haraway’s famous statement that she would rather be a cyborg that a goddess. Now the conceptual underpinnings are multifarious. Science fiction and modernist dystopias, Ballard and Archigram, all mixed up with the excesses of both burgeoning Korean consumerism and the political repression which she experienced as the child of activist parents. 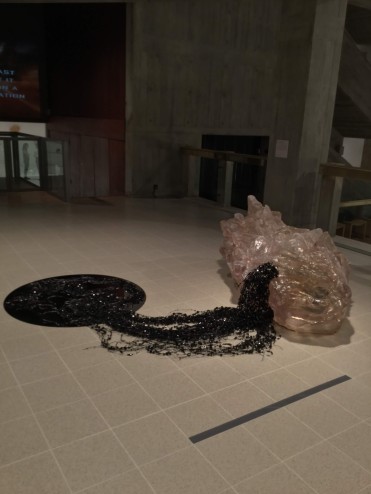 The range of her materials is enthralling. She remembers the mix of blood and cake that she saw as a child when a couple on a motorbike crashed into a bakery. That combination of deliciousness and horror is a defining feature. The black crystals oozing from a lump of fibreglass, the geometric precision of truncated porcelain limbs and, perhaps most memorably, the tumor like shapes of stuffed pink fabric which proliferate so abundantly that they seem to wriggle. There is beauty as well but heavily impregnated with threat.
It is a virtuoso performance by an artist who has become increasingly celebrated. But what I knew nothing about and found most moving were the videos of her early performance pieces. Korean society was extremely repressive, especially for women, and she must have been really courageous to crawl around in public places wearing her horrifying costumes, not to mention re-enacting her abortion while suspended naked upside down by ropes.
A couple of hours is not enough for this exhibition: a couple of days would be better.
Lee Bul ‘Crashing’ is at the Hayward Gallery until 19 August. 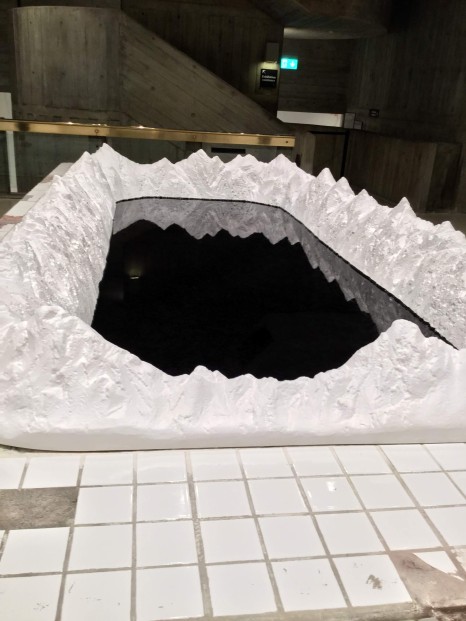