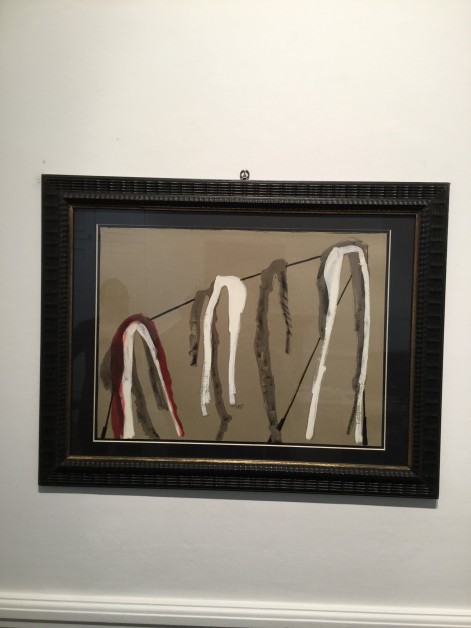 Carol Rama was much feted at the end of her life but the applause was long overdue. Born in Turin in 1918, her family life ended in tragedy which clearly played a part in the evolution of her wildly idiosyncratic and violent imagery. Tongues, penises, and snakes often emerge: they protrude and push and crawl. Her first exhibition in 1943 was closed down by the police: fascist Italy did not look kindly on scatological detail.

What is remarkable about her – and incidentally what distinguishes her from a lot of other female artist whose work is seen as autobiographical, is that she most definitely did not go on beating the same old drum. Her early sexually explicit (and wonderful) watercolours gave way to collages incorporating objects such as hypodermic syringes and glass eyes. In 1970 she began using rubber: sliced tyres and coloured inner valves which in her hands become analogous to pock marked and decrepit skin.

The tyre work in the present exhibition however is dark and elegant: you never know what card she is going to pull out of the hat. Darkness is in fact a leitmotif. Her work is dark, literally in the elaborately detailed frames, but more significantly in the metaphors of madness and contagion which are often evoked. The work in this exhibition is comparatively quiet but all of it is so distinctive that you really must see it.

Carol Rama is at Repetto, 23 Bruton Street, until 4 May.