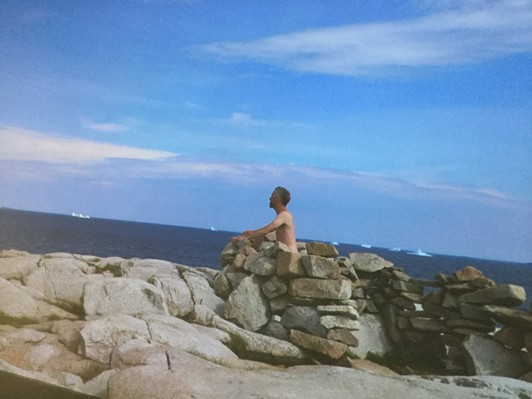 Most of us would admit, somewhat brusquely, that we have no kind of contact with a world in which animals and humans coexist on an equal footing. . Marcus Coates on the other hand does his damnest to enter into this kind of zone. It seems to me that he might have some sympathy with the tenets of the animists. For example, we are told that if they kill an animal, say a reindeer, it is necessary to apologise to that animal.

One of the two films in this exhibition shows a committee on Fogo Island apologising deeply for the extinction of the Great Auk. This charming penguin disappeared in the mid nineteenth century because of the way it had been so relentlessly hunted. The other film shows Coates, ‘The last of its kind, ’ standing behind a pile of stones on the shoreline of the island, shouting out an ironic litany of the ‘achievements’ of homo sapiens : ‘Penicillin’ ‘Pasteurisation’ ‘The Pyramids’ all get tossed to the winds with gay abandon.

It is a joyous performance. I felt exhilarated until I began to think about the implications. The daily total of extinctions of species is horrifying and, somewhere in the back of our minds, we know that we too will become extinct. The people of Fogo clearly regret the loss of the Great Auk but maybe nature will have cause to celebrate when we vanish from the planet.